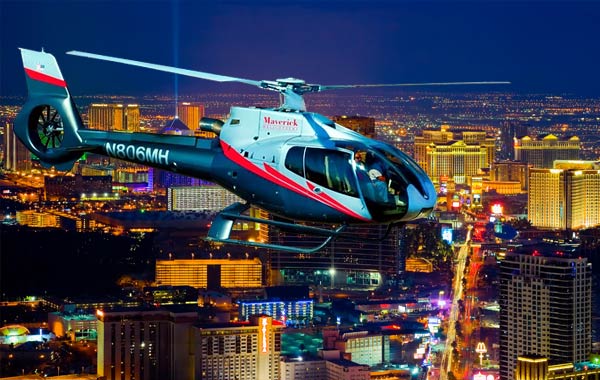 Explore the Las Vegas Strip in style! On your next trip to Las Vegas, live like a rockstar and see the world-famous sights aboard a helicopter. Combine your tour with exploring the Grand Canyon or take the Skywalk Express tour for an unforgettable helicopter experience!

Depending on the tour, you can see:

The staff is amazing!! From the driver to the nice lady at the front desk, really helpful and making sure you have a great experience, ground staff and pilot also were the best. 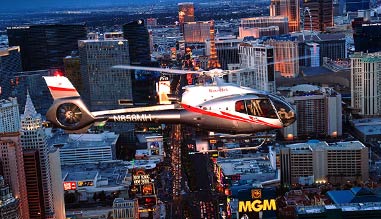 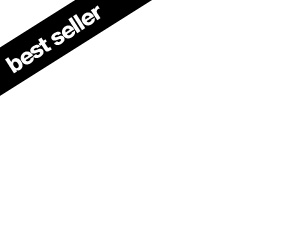 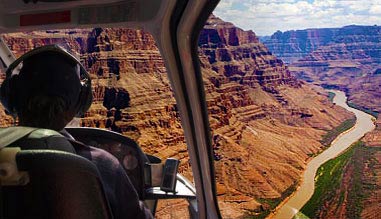 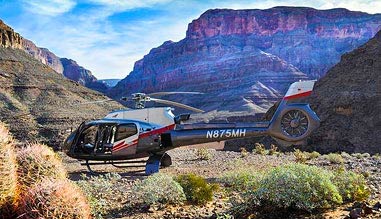 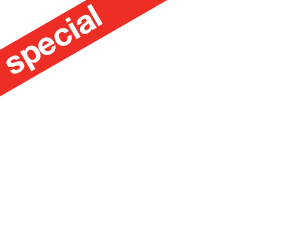 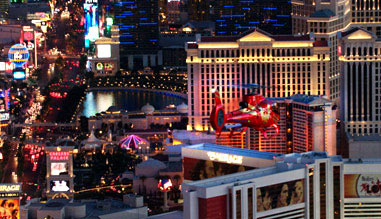 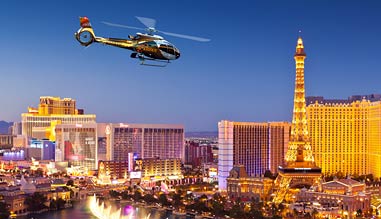 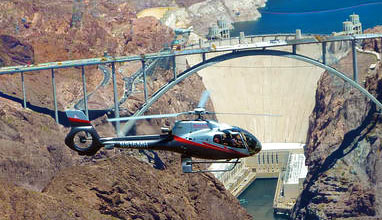 Get a bird's eye view of the fabulous Las Vegas! See the Stratosphere, the Bellagio and its famous fountain, Caesars Palace, the Mirage, the Wynn, the Venetian, City Center, the MGM Grand and the Luxor space beam.

Alternatively, book a Grand Canyon helicopter tour. This thrilling excursion takes you over the West Rim in a luxury helicopter for an oohing and aahing experience you will never forget. Gaze upon the Hoover Dam, Bypass Bridge and Black Canyon before moving on to Fortification Hill and descending into the geological marvel that is the Grand Canyon.

My overall experience was amazing! The staff was friendly and helpful. The pilot made me feel safe. I'm thankful to find my adrenaline back. I will book again, thanks for everything.

Amazing experience from start to finish. Mike the bus driver was so friendly and welcoming and Captain Connor was brilliant. Fantastic facilities. Would 100% recommend this experience. Thank you

I brought the experience for my wife as a surprise and she can't stop thanking me and verbalizing how much she enjoyed it.

The helicopter ride was fantastic! The views were spectacular, and my guest was overwhelmed with joy as she could not have had a better time.

This was such an enjoyable flight. We had the best pilot. I would do it again when coming to Vegas and would recommend it to my family and friends.

Adrenaline had a great price for a great adventure. I handled all my transactions over the internet and they were accurate and fast. I would definitely use their services again with confidence.

Ken A
Your Las Vegas Helicopter Ride: Where to Fly and What to See

Welcome to Las Vegas—a kaleidoscope of bright lights, entertainment, and excitement. Here, the energy is electric, the night is magic, and the wonders are endless. Known for its lavish suites and luxury casinos, the city’s neon vibrancy is unparalleled. To see as much as you can, take a helicopter ride! In a single swoop, you’ll experience all the unbridled extravagance Vegas has to offer. Day and night tours are dramatically different; both offer their own mesmerizing sights. With day tours, the city’s expansive vistas provide panoramic views of the valleys, lush meadows, and desert mountains. Witness the wonders of the Hoover Dam, the Grand Canyon, and the breathtaking display of Nevada’s natural abundance. Night tours bring with them a visual banquet where flashing lights collide with atmospheric action—this is when Sin City truly comes to life. You’ll fly over the Vegas strip and gaze upon the famous city landmarks such as the Bellagio Fountains, the lit-up Eiffel Tower, the Luxor Pyramid, and much more. High above the world, you’ll see a brand-new side of this majestic city.

Flights over the strip usually last from 12-15 minutes. Tours that take you over the Hoover Dam and Grand Canyon can range from 30 minutes to 4 hours. Longer helicopter rides even include stops at different vantage points where you’ll be stretch your legs and explore the sites on foot.


Where Do Flights Depart From?

For tours of The Las Vegas strip, flights generally depart from the McCarran Atlantic Terminal. Other tours, specifically ones for Hoover Dam and the Grand Canyon can also begin at the heliport in Boulder City or sometimes a secondary terminal near the Strip. Most tours do include hotel pickup unless otherwise specified—often, you’ll ride in style in a limousine!


What Are You Flying?

Among the most popular choppers touring Sin City is the EC 130. It’s a photographer’s best friend with its full-glass cockpit. Also known as the ECOSTAR, this chopper offers one of the smoothest, quietest rides possible. It accommodates up to seven passengers with generous, comfy seats.


What Sights Do You See on a Helicopter Flight Over the Las Vegas Strip?

Decked with some of the most extravagant hotels and largest casinos, the 4.2-mile Strip is the city’s magical epicenter as well as the biggest adult playground in the United States. Above the strip, you’ll be treated to a cityscape brimming with neon lights and over-the-top architecture.


The Bellagio and its Famous Fountains

This destination of decadence is famed for its stunning design and lavish interior. At the time of its opening, it was the most expensive hotel ever built. One of its most notable features is, of course, the famous Fountains of Bellagio, a highly choreographed fountain that dazzles with a spectacular display of synchronized lights, water, and music. This site is even more impressive when seen from the skies.

Perched 30 stories high on the southern end of the strip, the Luxor Pyramid is one of Las Vegas’ most recognizable resorts. The hotel is owned by MGM Resorts International and boasts a 120,000-square-foot casino. A 110-foot tall replica of The Sphinx of Giza sits at the entrance along with a sky-high obelisk honoring the antiquities of Ancient Egypt.

At the apex of the Luxor Pyramid, an intense beam of light is projected into the night sky. At 42.3 billion candela, the light beam is the most powerful in the world. It’s visible from several hundred miles away.

Just north of the Strip, you’ll soar above The Stratosphere Las Vegas. The hotel and casino’s signature attraction is the Stratosphere Tower. Standing at 1,149 feet, it’s the tallest freestanding observation tower in the United States. At the top are two observation decks: the revolving Top of the World restaurant and four thrill rides!

One of Las Vegas’s largest and best-known attractions is Caesar’s Palace, situated on the west side of the strip between the Bellagio and the Mirage. Larger than life, the Palace has served as the musical residence of numerous superstars including Frank Sinatra, Celine Dion, Elton John, and Diana Ross. With iconography that harkens back to the Roman Empire, it contains many statues, columns, and a 20-foot statue of Augustus Caesar.

A spectacular Polynesian-themed resort and casino. Fly after dark to get overhead views of its erupting volcano. Other highlights include a huge atrium overflowing with palm trees and the biggest freestanding marquee sign in the world!

You don’t have to travel to Italy to experience the allure of a romantic gondola ride. The Venetian resort and casino features architectural replicas of famed landmarks including Piazza San Marco, the Rialto Bridge, the Palazzo Ducale, and even the Grand Canal—gondolas and all!

With 6,852 rooms, The MGM Grand is the largest single hotel in the United States. At the time of its opening in 1993, it was the largest hotel complex in the world. From high above, you’ll recognize the monumental lion statue that majestically stands guard above the entrance.

Downtown Las Vegas, also known as Old Las Vegas, is the city’s historic cultural and entertainment thoroughfare. It’s got a style all its own. Among Downtown’s biggest attractions is Freemont Street, a 24-hour pedestrian mall where colorful light shows illuminate a 90-foot high canopy.


Take a Helicopter Flight Over the Hoover Dam

Fly above the Black Canyon and Colorado River where panoramic views of the Hoover Dam await. The landmark is rated as one of America’s Seven Modern Civil Engineering Wonders by the American Society of Civil Engineers. Built during the Depression Era, this national historic landmark was considered the largest dam construction project in the world. Today, it’s the source of hydroelectric power to Southern California, Nevada, Arizona, and parts of Mexico. Only from high above can you see the full, breathtaking scope of this architectural feat—as well as the stunning river-ways, canyons, lakes, and valleys that surround it.

Spanning 277 miles long, 18 miles wide, and more than 6,000 feet deep, the Grand Canyon is without question America’s most cherished natural wonder. Flights over the Canyon’s West Rim showcase the enormity and vastness of the Hualapai Tribe’s sacred lands. Here are a few highlights you’ll discover in transit:

Located on Eagle Point, The Grand Canyon Skywalk is a famed horseshoe-shaped cantilever bridge with a glass walkway extending out almost 70-feet over the canyon floor. As visitors peer 4,000 feet into the depths of the Grand Canyon, you’ll be eyeing them from hundreds of feet higher!

This manmade lake lies on the Colorado River. The largest reservoir in the United States, it spans many coves, rocky cliffs, and sandy beaches. Depending on its water levels, several small to medium islands are also visible from the sky.

Adjacent to Lake Mead and located at the northwest region of the Black Mountains, this 3,719-foot plateau-like prominence was formed by lava more than 13 million years ago. It’s a sight to behold from the clouds.

Sometimes, when flying over a landmark so enthralling, you might want to touch down to experience up-close views. Luckily, there are flights that let you hop off and explore the historical sites by foot. On discovery tours, you can encounter the grand scale of the Hoover Dam from terra firma. Take photos and learn all about the landmark’s construction on a guided tour.

Some Grand Canyon helicopter tours take you far up over Nevada’s most noteworthy natural formations before plunging 3,500 feet deep into the canyon where you’ll enjoy a light snack and champagne toast right on the banks of the beautiful Colorado River. Certain tours also include 45 minutes of sightseeing at the famed Grand Canyon Skywalk!


The Ultimate Las Vegas Adventure: Learn How to Fly a Helicopter

If the thrill of merely being in a helicopter isn’t enough, learn how to fly one! Experience an introductory flight lesson aboard a Robinson R44. Take the reigns as an instructor assists with take-off, flying and landing. Afterward, you’ll receive a signed logbook that can be used toward further training!

From the dazzling wonders of the desert to the hypnotic shimmer of the Strip, Vegas’ enchantment is legendary. Whether you choose the beaming night lights, or the scenic natural beauty (or both!), a helicopter tour is a spectacular way to soak in the unique thrill of Las Vegas at its glittering best.

Sign up for exclusive offers
#ShareAdrenaline
Most Popular:
© 2021 ADRENALINE, INC.